The purpose of these pages is to document the semantic representations produced by the English Resource Grammar (ERG; Flickinger 2000, 2011). The ERG is a broad-coverage, linguistically motivated precision grammar for English, associating richly detailed semantic representations with input sentences. These representations, dubbed English Resource Semantics or ERS, are in the formalism of Minimal Recursion Semantics (MRS; Copestake et al 2005). They include not only semantic roles, but also information such as the distinction between scopal and non-scopal arguments as well as semantic representations of linguistically complex phenomena including time and date expressions, conditionals, comparatives, and many others. ERS can be expressed in various ways, including a logic-based syntax using predicates and arguments, dependency graphs, and dependency triples. In addition, the representations can be obtained either from existing large collections (of close to 1.5 million tokens) of manually curated annotations over texts from a wide variety of genres (the Redwoods Treebank; Oepen, et al., 2004; Flickinger, et al., 2012) or by processing new text with the ERG and its associated parsing and parse selection algorithms.

As an example, below is the ERS for the sentence The garden dog tried not to bark. 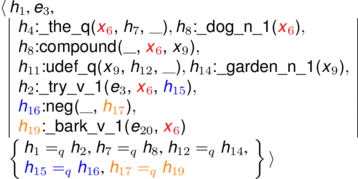 Structure of the Documentation

The ESD pages are organized as a hyper-linked collection of smaller documents, each typically discussing a specific semantic phenomenon or particular set of higher-level considerations. ERG meaning representations take the form of underspecified logical forms, adopting the framework of Minimal Recursion Semantics (MRS; Copestake, et al., 2005) The ErgSemantics/Essence page provides a high-level characterization of what you can expect to find in these meaning representations. An informal introduction to MRS, its use by the ERG, and basic terminology is provided by the ErgSemantics/Basics page. Beyond these more technical foundations, the ErgSemantics/Design pages discuss broader linguistic design decisions, for example assumptions regarding quantification, or the notion of eventualities assumed. For first-time consumers of ERG meaning representations, these pages aim to establish the ‘scaffolding’ for the core of the ESD pages, viz. a collection of pages that present individual semantic phenomena. The ‘table of contents’ for this collection is available through the ErgSemantics/Inventory page, and the process we followed for selecting phenomena to document is described on the ErgSemantics/Discovery page. We recommend starting the exploration of these resources via the following links:

In capturing semantic phenomena on most ESD pages (and hopefully also in future work on automated regression testing) we invoke a notion of semantic fingerprints, i.e. characteristics of a specific MRS configuration that identifies a token phenomenon. We utilize a compact template language for MRS fingerprints (similar in form to the MRS LaTeX style; called ERS fingerprints when specialized for the semantic analyses of the English Resource Grammar) that makes the specification of labels and (characterization) links optional, and further allows wild-carding of predicate symbols and role labels (using ‘_’, i.e. just an underscore). For example, following is the semantic fingerprint or plain N–N compounding (as in garden dog):

In other words, the phenomenon is characterized by the appearance of the two-place compound relation, linking together another two EPs in the configuration indicated by the shared label h (of the compound head and the two-place modifier relation) and the shared referential indices x1 and x2. These fingerprints will match the example given above, as well all other examples in the collection being searched analyzed as involving N-N compounding.

There is a search interface for ‘fingerprinting’ collections of ERG analyses, i.e. use patterns provided on ESD pages or own variants to retrieve instances of semantic phenomena from the comprehensive collections of manually annotated ‘gold-standard’ treebanks that accompany the ERG. In particular, these treebanks include a fresh re-annotation, dubbed DeepBank, of the venerable WSJ Corpus annotated in the Penn Treebank.

One aspect of the documentation produced in this work is a test suite illustrating each identified phenomenon with one or more short, simple sentences, attempting to balance restricted vocabulary size with the clarity of the intended reading of each example. This test suite can be viewed as an extension of the MRS Test Suite.

The ERG Semantic Documentation (ESD) initiative is an ongoing effort to provide ‘end-user’ documentation on the meaning representations that provide the interface to parsing and generation using the ERG. While ERG meaning representations abstract to a large degree from semantically irrelevant surface variation, it can at times be challenging to interpret (and appreciate) the nuances of particular semantic analyses. The ESD pages seek to provide an ever-growing ‘encyclopedia’ of semantic analyses available from the ERG.

Additional background information is provided by Flickinger, et al. (2014). These pages are jointly maintained by Emily M. Bender, Dan Flickinger, and Stephan Oepen, with input and feedback from, among others, Francis Bond, Ann Copestake, and Alex Lascarides.

How to Cite this Work